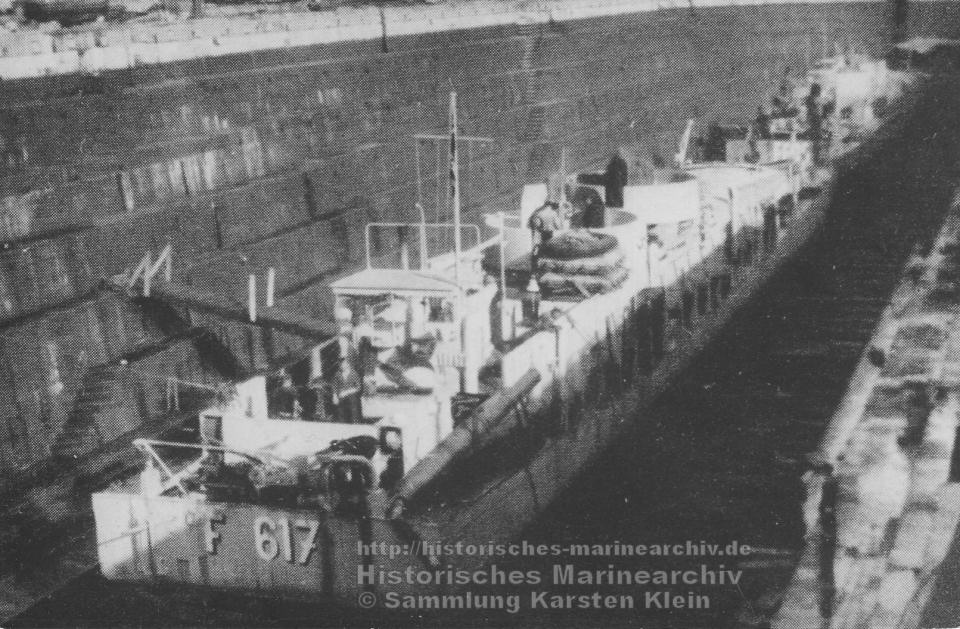 I wake up at 5:45am thinking I forgot to fill the argon tank I’ll use with my drysuite during today’s dive.

Yesterday Andres, from Kron Diving on Rab Island in Croatia, asked me to join a group of Austrian rebreather divers that plan to dive on the MFP wreck – a German’s World War II troupe transporter that sank to 90 meters just about 10 miles away from the Kron Diving Center.

The Austrians are super technological and will dive with JJ Closed Circuit Systems and underwater scooters.

It’s amazing looking at these skilled divers moving in a synchronized manner with their dive team. Everybody is checking and paying such attention to their equipment and their buddy’s one. The JJ Rebreather is one of the best closed circuits on the market, which is developing fast. A rebreather cut up to 20% of the costs for the gases needed for such a dive and that’s not peanuts. I’ll spend more than 100€ on gas only to fill my double tank with a Tmx 15/55 and stages bottles that I’ll use during my one and a half hour slow ascend to the surface. I’ll decompress with a different Trimix blend: from 66 meters to 21, Tmx 21/35, then from 21 t to 6 meters I’ll breath a hyper-oxic Nitrox 50%O2 and finally I’ll pass to pure Oxygen for at least half hour. 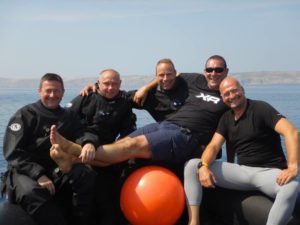 The Dive Team for the MFP433 wreck

The Austrian, will also be able to ascend more rapidly than me because their rebreather always provides them with a best mix of 1,3 Oxygen Partial Pressure, which means their bodies will have less gas accumulation in the tissues.

Another advantage is that they’ll breathe a warm and humid gas from their rebreathers, instead of a freezing one due to the gas depressurization from my tank’s 200 Bar to the ambient pressure.

I watch them onboard and they look like astronauts, with two control panels on each arm and their strange equipment and I decide that will be me in the future! Only drawback: these machines are quite expensive.

The Dive on the wreck

I’m super excited for my dive and, discussing all deco procedures with my buddy last time, I feel like the luckiest guy in the world to be part of this group.

Andreas will be my buddy. He’s setting his rebreather, a different brand than the Austrian team, but with the same advantages of having a rEvo Unit. For the last time, I check my double 12 lt that I’ll carry on my back and tree additional tanks for the decompression stops. We jump in the water and Ralph, the boat captain, passes me the stage bottles which I carefully attach to my harness. A quick look of agreement with Andreas and we go. 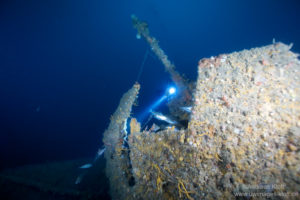 We check all valves again at 5 meters and each other for any bubbles or leaks. It’s all ok, and now we can really go. We plumb down until 65 meters and we still don’t see the wreck, but then it appears at 75 almost unexpected.

It’s beautiful and full of life! Andreas asks me if everything is ok and we start to explore inside where it’s packed with war materials: phones, ammunition, shoes, bicycles, binoculars, dishes, propellers. It’s amazing how I can imagine the sailors during their life on this boat, until their very last moment when they were hit during war ship fight.

We go further and in the middle of the sunken vessel I see two huge congers and a 6 kilo scorpion fish laying as the sentinel of the wreck. At this point, we are at 83 meters, but we decide to go into the deeper part at 87 to the propellers. 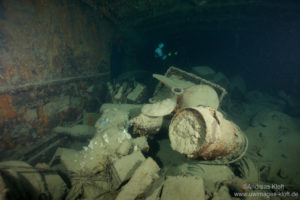 An unexpected strong explosion shocks me for a moment and I rapidly control my gauges and equipment, trying to understand what’s was going on.

Andreas shows me that the video light arm that has imploded. Wow. Nothing to be worried about, fortunately! We fly onto the deck, where we find a huge machine gun and cannon 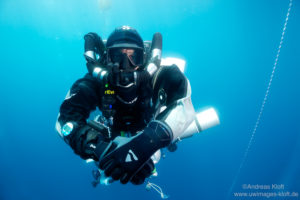 Andi and his rEvo Rebreather

I look at my pressure gauge and signal to Andreas that’s time to go up. We’ve already spent 23 min at 85 meters and I’m getting short of bottom gas. Andreas doesn’t have gas management problems like me with his rEvo Rebreather because he’s rebreathing his own gas after it passes through a filter which eliminates CO2 and adds the right amount of Oxygen back. I change gases on the way up according to plan and my dive multi-gas computer and after 135 min, my head’s out of the water.

What a dive! I’ll remember this day for all my life! Thank you Andreas!

The return from the wreck …

I came onboard and received a big hug from my buddy, full of happiness because of the beautiful day we spent together. Far away off in the horizon, we spot the inflatable buoy of the Austrian team. We’re all onboard after a few minutes and head back to the diving center, flying at 35 knots on Kron Dive Center’s Zodiac 9 meter long powered by two 250Hp engines.

My smile is tattooed on my face for the entire evening and during the last dinner before the Austrian team leave to home.

Every day I jump in the water, either for guiding recreational divers or to participate in difficult Tech Diving missions. It’s crystal clear that I could not be happier than living as I choose to.

If you liked this post leave a comment and your email and you’ll receive the newest updates!